The AUD/USD currency pair continues to astound the most avid observers of historical exchange rates in the world of forex. One must go back thirty years to find rates comparable to today’s market valuations, and since the year 2000, the Aussie Dollar has more than doubled in value to reach today’s rate. Often viewed as a barometer of global growth, it closely correlates with the demand for commodities and has appreciated greatly due the success of emerging markets in Asia.

Australia has often been referred to as a land filled with “very expensive rocks”, a reference to their extraordinary wealth of mineral and ore deposits. Mining in Australia has always been a critical leader of the nation’s economy, accounting for 5.6% of GDP and 35% of exports. Australia ranks highly among the export leaders in nearly every raw material extracted from the earth, presently being the world’s largest exporter of coal, iron ore, lead, diamonds, zinc and zirconium, second largest of gold and uranium, and third largest of aluminum. Its export trade of basic raw materials has fed the energy demands of its Asian neighbors. It is no wonder then that its value has outpaced the Greenback for over a decade. 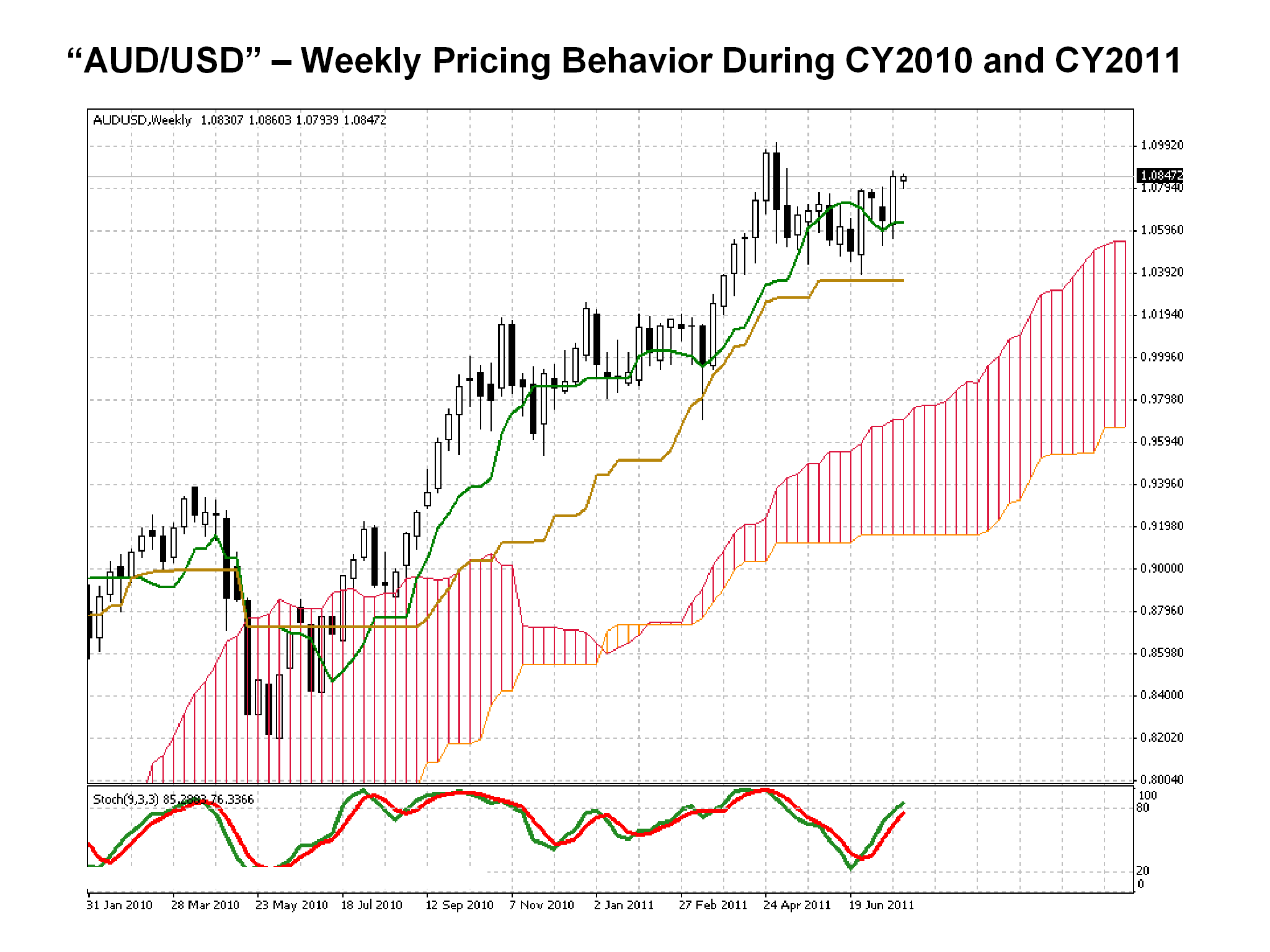 As the above chart reveals, the Aussie Dollar’s upward move has not abated in the past eighteen months. Except for an unwinding of the carry trade during Europe’s debt crisis and an occasional consolidation after a run up, the “AUD” has maintained its northerly course. Weekly candlesticks are depicted in the chart, and helpful indicators have been added to provide hints for the future. From a purely technical perspective, the present trend appears strong, but most market observers expect “gravity” to take over soon.

Australia has benefited greatly from success in China and India, but can this level be improved upon or, at a minimum, sustained? Even though the current trading level is $1.086, most all experts are pessimistic regarding near-term directions for the AUD/USD currency pair. One group expects a minor correction to $1.04 by yearend, while a second group suggests a dramatic shift back down the $0.80 range that has not been witnessed since June of 2009.

What possible evidence could support these pessimistic views? First, the Fed’s QE2 program is over. Most all currencies benefited from this program as the U.S. money supply was expanded by $600 billion at the expense of its global valuation. Some snapback should be expected going forward. Economic news out of China also points to a gradual slowdown of demand for Australian exports, and specialists on the currency front believe that the Aussie Dollar is trading at a 35% premium when compared to models based on purchasing power parity.

The current debate deadlock on raising the debt ceiling in the United States is one factor providing pressure in the opposite direction, but this issue may be temporary in nature. In summary, all of these factors are beginning to point to an inevitable selling scenario at some point in the future. Timing this reversal will be difficult since interest rates will play a role in the equation. Some bounce is expected in U.S. yields, but Australia’s central bank has signaled a neutral posture for rates for the remainder of the year.

So what should an investor do? Caution will be the watchword for the Aussie Dollar. Issues outside of the country that are beyond its control will dictate the future direction of their national currency. These factors, along with historical norms, will provide the “gravity” that seems absent at the moment.