The EUR/USD currency pair has been on a rollercoaster ride over the past year, buffeted by the hope that Western economies would somehow find the right formula for dealing with their respective debt loads and deficits while producing domestic growth worthy of recognition. Emerging markets have dominated the positive side of economic statistics for far too long, but the largest traded pair in the forex markets continues to reign supreme, as the combined strength of the United States and Europe economies still dwarfs all contenders.

The path of the EUR/USD currency pair has favored the Euro over the past year, as the Eurozone moved to repair its leaking “deficit” dikes and the U.S. diluted its currency with quantitative easing. As the chart below reveals, the Euro hit its nadir in May of 2010 after the complete facts came to light regarding the debt problems in Greece and other weak member states. From that point on, however, the Dollar has weakened considerably until the Fed’s QE2 program concluded at the end of June. 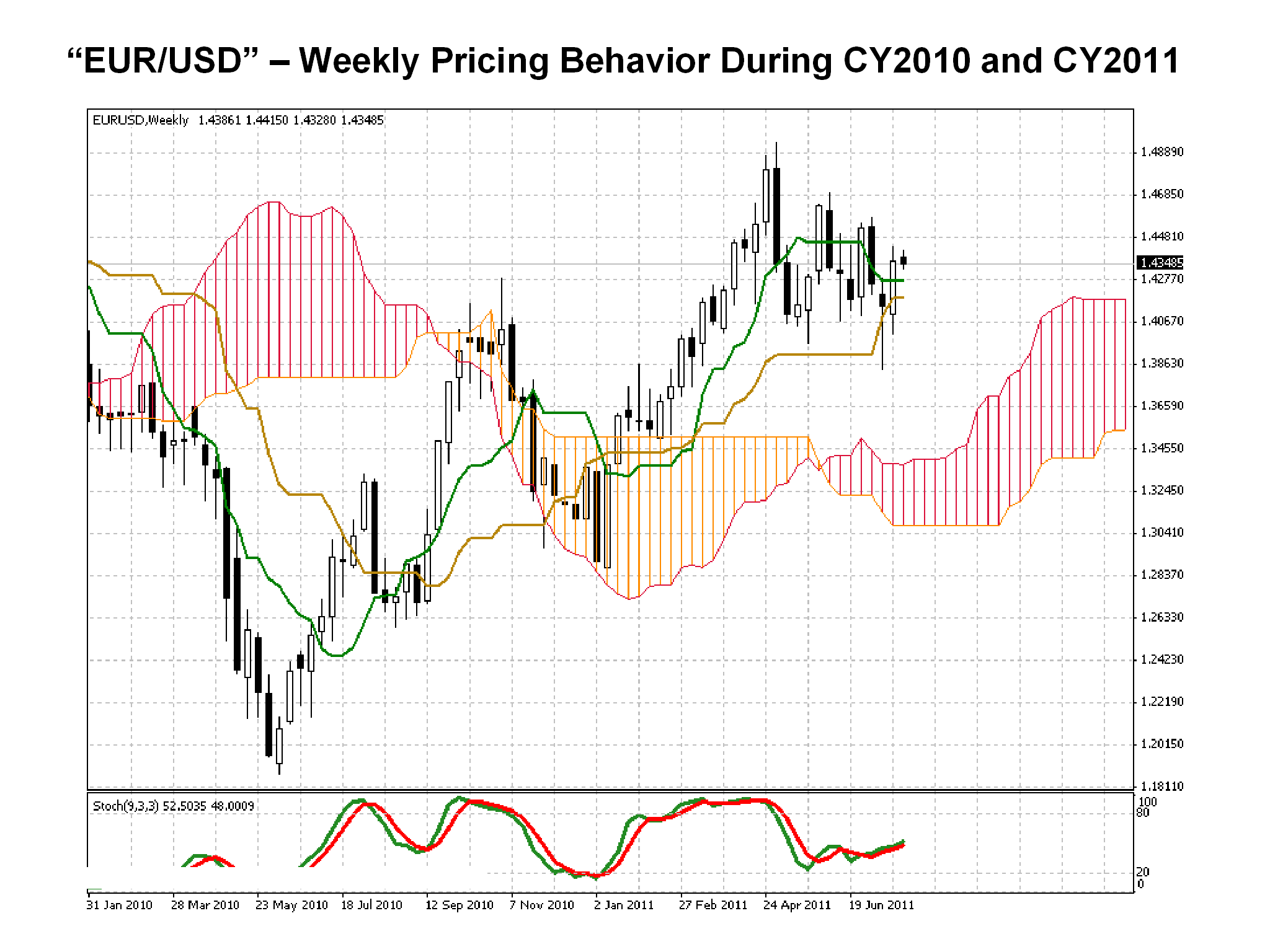 Weekly candlesticks for the EUR/USD pair are depicted above, with an overlay of the popular Ichimoku and Slow Stochastics indicators presented for directional insights. The “Kumo Cloud” actually projects a period of support for the balance of the year, based purely on previous pricing behavior, while the two moving averages suggest the formation of a ranging or sideways trend for the upcoming months. The Stochastics oscillator is also trending in a mid-region, a sign that the market has yet to make up its mind as to its next move.

The question on everyone’s lips is where will this pair go for the balance of 2011? Two popular Internet forecasting groups appear to differ materially on their respective guesstimates of the future. The Euro is currently in the $1.436 zone. One group of experts sees a decline to $1.24 by the end of the year, while the other group predicts a rise to the $1.49 level.

Which prognostication is to be believed? This pair remains a barometer for how well each region deals with its financial affairs. The U.S. political front is currently deadlocked in debt ceiling debates tied to spending cuts and raising tax revenues. A compromise is expected that could boost the greenback’s support, but work on the deficit and trade imbalances must still be performed before the market will be solidly behind the Dollar going forward.

Europe must publicly get its financial infrastructure back in order. Confidence is continually shaken when new rounds of potential debt defaults require immediate attention from stronger nations, now disgruntled by never ending bail out requests. Interest rates are rising in the region, a boon to larger exporting countries like Germany. Industrial orders in Europe have been on the rise, a significant signal that economic recovery may finally be stabilizing. Economic data releases in the United States, on the other hand, have been tepid at best, further strengthening the hand of the Euro.

Ranging markets cannot last forever. Eventually, a breakout will occur, based on some global event or significant news that shifts the fundamental mindset of currency traders. Investors must stay tuned to economic data releases from both sides of the Atlantic and keep a steady eye on the actions of various rating agencies. Debt security downgrades always make for big news, and a downgrade of U.S. treasuries could force an upward trend in the Euro’s fortunes.

We are approaching the fourth quarter in the EUR/USD currency “game”. One good bounce could determine the outcome for 2011.