The USD/JPY currency pair, second only to the EUR/USD pair in trading volume, has been on a lengthy strengthening move over that past eighteen months, despite national disasters to the contrary. Known favorably as a base currency for the popular “carry trade2 amongst forex traders, The Yen has moved into a position of steady strength while its economy has been plagued with low growth for nearly two decades.

Japan has been a textbook case on what is known as a “balance sheet recession”. When housing values dropped 38%, 90% in some cities, in 1990, companies abandoned profit maximization as their number one priority and shifted instead to debt minimization. Debt payments and savings piled up in banks since no one was borrowing, and Central Bank monetary policy had no impact. The only solution was for the government to provide economic stimulus, and that is exactly what happened. Japan stabilized and stayed afloat even after a loss of wealth that exceeded $10 trillion. 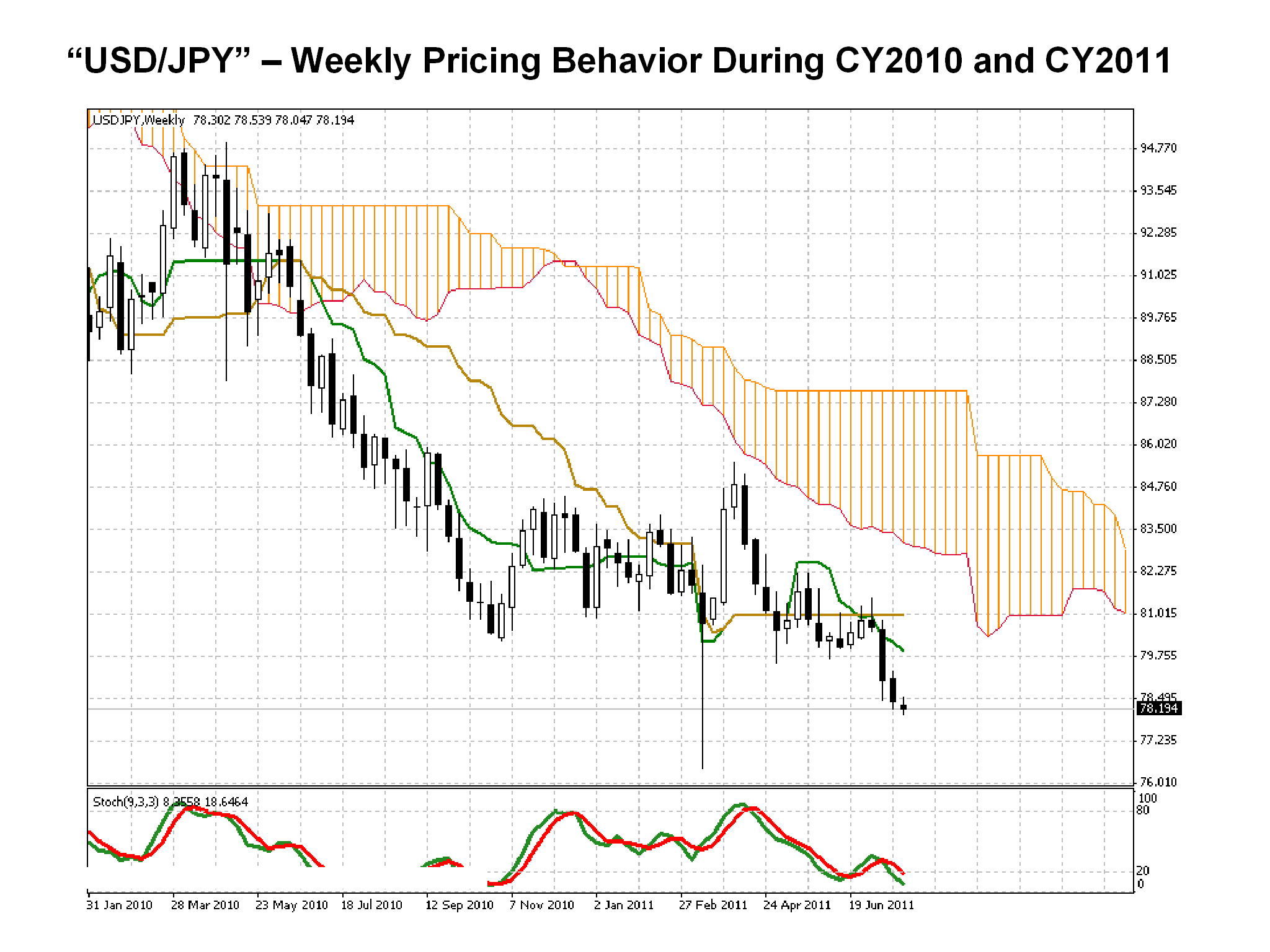 In 1990, the Dollar could buy roughly 150 Yen. As the chart illustrates below, that same Dollar can only buy 78.2 Yen today, a new record for strength over the past forty years.

Can the Yen continue to appreciate in today’s “new” economic world? The indicators on the chart would seem to suggest that a current “overbought” condition exists. A small pullback may be in order with support at the “80” level, but the overall sideways pattern since last September reflects the sentiments of the market that a stronger Yen is not a sustainable option.

Demand pressure following the horrific earthquake in March produced a “76” value for the currency, but this figure is viewed as an anomaly than a true record. Officials from the G7 countries, including Canada, France, Germany, Italy, Japan, the United Kingdom and the United States, reacted quickly, and, for the first time in over a decade, made a decision to intervene by selling Yen denominated securities. These actions temporarily relieved the demand pressure on the currency, but market forces soon dissipated the effects of this intervention effort.

Can the USD/JPY continue on its current path? Most experts in the forex industry known for their accuracy in predicting long-term moves in currency values think not. Depending on how strongly the United States economy recovers over time, ranges for the end-of-year value for this pair gravitate between 78.7 and 85.8, marking a general stabilization or weakening on a gradual basis from today’s 78.2 starting point.

A weaker Yen would certainly help Japan’s export trade to recover, especially its auto industry that was hit hard following the earthquakes. Repatriation of foreign assets for the redevelopment effort will continue to exert demand pressure, however, another reason why the Yen maintains its strong position. Japan also has a positive trade balance, even with China, and substantial foreign exchange reserves that bolster the currency’s value.

Some “snapback” in value was expected after the quantitative easing program in the U.S. was concluded at the end of June, but the opposite has occurred. Many believe that the popular “carry trade” strategy is returning, and, with debt and deficit issues dominating U.S. politics, many also expect the Yen and the Swiss Franc to become the new “safe havens” that risk-averse capital will seek if global events dictate such a flight.

What is an investor to make of all of this? The historical imperative weighs heavy on the future prospects of the Yen versus the Greenback. Gravity at some point must take over. Caution is advised if appreciation is your objective.

Risk Disclosure: Trading foreign exchange on margin carries a high level of risk, and may not be suitable for all investors. The high degree of leverage can work against you as well as for you. Before deciding to invest in foreign exchange you should carefully consider your investment objectives, level of experience, and risk appetite.