The GBP/USD currency pair has correlated almost exactly with the trending behavior of its rival, the “EUR/USD”, over the past twelve months. Although the United Kingdom is independent from Europe, its banks still have many European bond securities on their respective balance sheets and export trade relationships are also entwined enough to provide additional linkage in the Pound’s tendencies versus the Euro. Favorable economic data has buoyed the Pound of late, and data releases to come may reinforce the current positive moves.

As a sovereign nation, however, Great Britain has been able to move more aggressively in dealing with its various financial problems. Political direction shifted rapidly, and austerity programs were forcefully adopted to repair fiscal weaknesses, resulting in a quicker appreciation after the May debt crisis of 2010. The Pound also benefited from quantitative easing in the States, as the expanding Dollar money supply diluted its value on the global stage. Following the conclusion of QE2, Cable has settled into a sideways trend, as the market gauges its next assessment of the economic scoreboard. 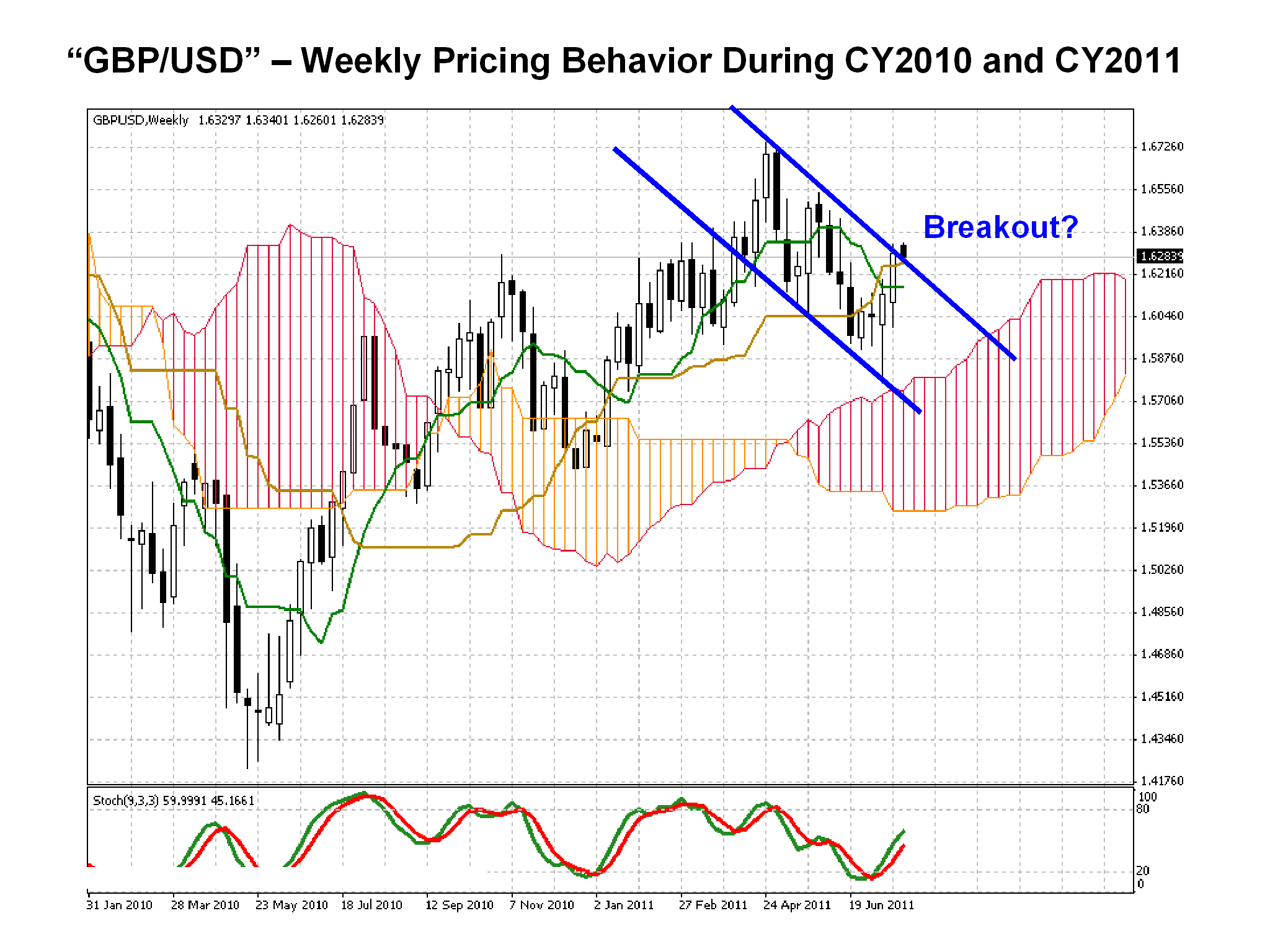 From a purely technical perspective, the above chart displays the weekly pricing candlesticks for the GBP/USD currency pair for the past eighteen months. The indicators have been added to provide technical overviews of the situation at hand. The Ichimoku indicator projects a “cloud” of support going forward, while the moving average lines denote a current ranging condition. The Slow Stochastics indicator suggests that a balance exists between buyers and sellers, another reflection of a market waiting for a signal before making a breakout move.

Will the Pound continue its upward appreciation for the balance of the year? Currency experts are divided in two camps when asked this very question. Too many serious economic issues have yet to be resolved, and making a bet for the future entails taking sides on how these issues will shake out over the ensuing months. The current prevailing rate for the GBP/USD pair is $1.628, but one camp favors a $1.31 figure at yearend, while the other group predicts a slight correction to $1.61.

While the two forecasts above mirror differing biases regarding upcoming economic events, there are analysts that see another scenario in the offing. Retail sales have made a slight improvement that some believe will augur well for other economic improvement as well. These “optimists” see the beginning of a “channel” breakout, as noted on the above chart, and further appreciation to come if favorable data contribute from other sectors.

On the other hand, it has been difficult for the Pound to become “unhinged” from the plight of the Euro, which has followed a similar path to the Pound, but is far from out of the woods due to its constant battle with weak member states getting their various affairs in order. For the same reasons, the fate of the GBP/USD pair is tied inextricably with the ongoing debate in the United States. If Congress adopts a meaningful deficit plan, approves a rise in the debt ceiling, and rating agencies comply, then the Greenback will come roaring back as a rebuff of current sentiments.

The course of the Pound for the remainder of the year comes down to basic economic facts. Inflation is above 4%, while interest rates remain near zero. GDP growth is forecast at around 2% for 2011, but the divergence of inflation is the pressing issue. The United States is forecasting better growth, but inflation is in check. Conventional wisdom would dictate a lower valuation, but experts differ on the degree.